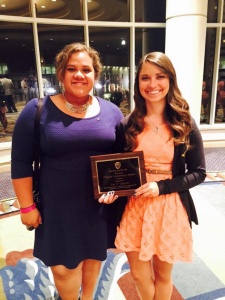 Kappa Kappa Psi and Tau Beta Sigma marked the end of the 2013-2015 biennium with our national convention in Lexington, Kentucky. From July 28th to August 2nd brothers and sisters from across the country came together to get down to business. This biennium, Iota Pi had the honor of being one of the Chapter Leadership Finalists, a distinction that Kayla and I discovered was not to be taken lightly. In his final report, the committee chair of the Chapter Leadership committee stated that over sixty chapters were deemed eligible for the award this round, but the finalist selection process this biennium would be far more refined. Chapters were actually investigated and scrutinized in order to ensure that only the very best of Kappa Kappa Psi was selected.
The overall convention seemed like a mammoth district event filled with workshops, concerts, and caucusing. The first large obstacle was seating delegates for every single chapter (over 300 chapters have been founded since Alpha in 1919). Kayla Pedrani was our delegate for Iota Pi (seated in the back corner, I guess we’re still not that old) and Nu Nu (University of Alabama) will forever hold a place in my heart as I became their proxy. Once all the delegates that showed up were seated, attendance was taken and proxy candidates were established (like me). This whole process took a thrilling two and a half hours. These seats were our second home for the rest of convention. 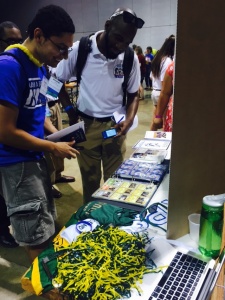 Delegates from other chapters view the media presented by Iota Pi in our bid for the Chapter Leadership Award.

The second day of convention, Kayla and I set up our poster, decorated our table, and talked to people who stopped to ask about our chapter, curious about our successes. It was interesting listening to other people share the struggles their own chapter faces. Many brothers were simply eager to learn from others and see how they could break away from bad habits. One unique trait of National Convention is the abundance of “old” people, actual real adults (alumni). Christine Beeson (now Immediate Past National President) asked brothers in attendance how many National Conventions they have attended. There were brothers who had attended over ten National Conventions over some 20 years! That’s more years of Kappa Kappa Psi than I have been alive.
National Convention also brings you closer to your district. As the week progressed it was kind of easy to see how the West is the “black sheep” district. Not that we were ashamed of it at all. Through our caucusing, we got to know each other while still discussing each national issue and proposal carefully. There were many big topics brought to the table, including a raise in dues, the slate for national council, the timing of the slate for the national council, as well as policy changes to the investigation of chapters and even individual brothers. Overall, the convention was a success and a very worthwhile experience for every brother and sister in attendance. It allowed us brothers to meet other brothers from across the country and bond more with sisters while developing friendships that might not have happened anywhere else.