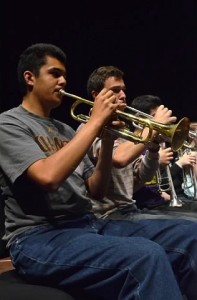 The 20th year of the Cal Poly All-State Music Festival went off without a hitch!  Led by our fearless crusader Kevin Capacia and his steadfast banner-man Bryan Schmidt, 87 high schoolers from across the realm of California were housed, fed, and guided around the campus (when they were not sitting in multiple hours of rehearsal) for the weekend.

On the first night of the festival (also coinciding with Friday of the University’s Open House) the Cal Poly Symphony, Jazz Band, and Wind Ensemble (directed by Christopher Woodruff, Paul Rinzler, and director of bands Andy McMahan) performed a masterful concert to showcase the talents of the students involved in the Cal Poly’s music department.

Our director of bands emeritus, William Johnson, was able to return to conduct the festival Wind Orchestra, and the students in the festival Jazz band (led by Chuck Wood) joined together on the last night of the weekend to create a whirlwind of a performance for their parents and the Cal Poly community.  The hard work and hours of rehearsals paid off for each of the groups, and highlighted the genius of the solo competition winners: Robert Collar (clarinet) & Henry Wolfe (flute). 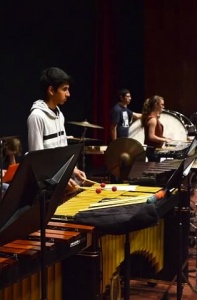